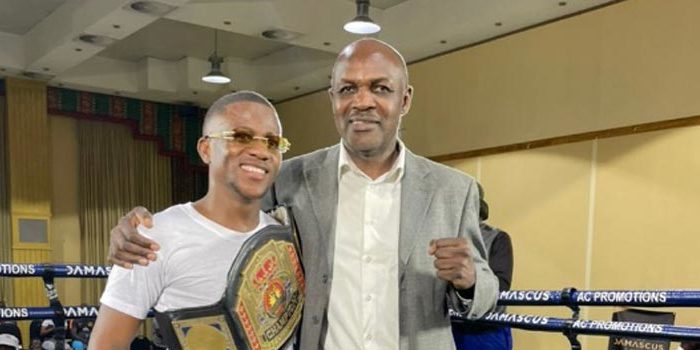 The Cosmos High School Grade 12 pupil brought the curtain down on a decent year of Namibian boxing with a commanding points victory over experienced former African champion Abraham ‘Energy’ Ndaendapo (39).

Nangolo dominated the fight from start to finish, showing impressive maturity belying his tender age to steal the show in the AC Boxing’s Rising Stars bill’s main event at the NamPower Convention Centre in Windhoek on Friday night.

“Special One showed the world he’s a future world champion, as you saw what he did to Abraham Ndaendapo. He put up a very good boxing clinic on him,” Moses says.

Nangolo improved to 8-0, with Ndaendapo dropping to 17-8.

“I worked so hard to be here. I just went in there and displayed my skills. I couldn’t hurt the guy, because my hands are messed up,” says Nangolo, who injured his knuckles in the middle rounds.

He says he is ready to take on more challenging assignments abroad.

Ndaendapo proved to be anything but challenging on the night. His powers have visibly waned since challenging Russian Roman Andreev for the World Boxing Organisation Intercontinental lightweight title in 2017 and losing on points.

“I’ve been calling out these guys, but nobody wanted to answer the call. Forget about those guys. They are not worth talking about. They keep running, we keep moving. We keep doing what we’re doing,” Nangolo says.

“I’m the national champion now, so you know what’s next – it’s the bigger one.”

The next step for Nangolo, the nephew of ex-WBA lightweight world champion Paulus ‘The Hitman’ Moses, is fighting for continental titles.

The same is true for undefeated Harry Simon Junior, following a comfortable stoppage of Steven Shimbonde in their welterweight bout on Friday.

“I think we have very promising boxers at AC Promotions. For Flaim Nangolo and Harry Simon Jr, we expect them to fight for WBO Africa or other belts from other sanctioning bodies that are available,” Moses says.

“You look at Harry Simon Junior, he showed his skill, took his time, and made Steven Shimbonde quit,” he says.

Rispel beat Shikukutu Jona on points in their lightweight clash, with Alfeus outclassing Nghipondoka to score a points victory in a welterweight bout.

Ngesheya knocked out Simeon Varde Ndayambekwa in a lightweight contest.

“These young guys came in and made it look easy. When you watch these kids fighting, you can see their hunger and skill. This is what the fans want to see,” Moses says.

“The event went well. It was really tough to put it together, as most corporates are already on holiday. So, we’re looking forward to 2022. It will be a big year for us. Hopefully we’ll get a [substantive] sponsor.”

The tournament was made possible with the support of Tokai Logistics, MTC, TNl Logistics, Hotel Destiny, NamPower, and Profile Investments Holdings.