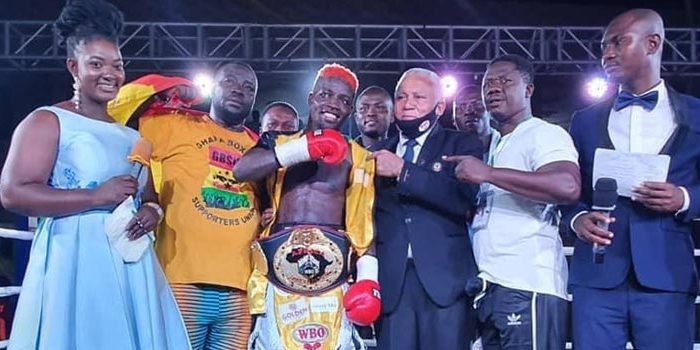 Ghana’s Sheriff Quaye got his career back on track with an emphatic win over Emmanuel Amos of Tanzania on Friday night.

In the headlining event of the Swavy Blu Promotions card, Quaye (21-3-1, 14 KOs) captured the WBO Africa lightweight championship after recording a third-round TKO win over Amos at the Royal Dede Golden Beach Hotel in Accra.

The Ghanaian has now won two in a row since a painful second defeat to nemesis Michael ‘One Bullet’ Ansah early this year which left many believing his career was on a downturn.

Instead, Quaye’s quest to make a significant impact on the international stage remains on course.

“I made a statement tonight and I am glad I have been able to achieve this,” Quaye told BoxingAfrica.com after the fight.

“The hard work starts from today because to maintain this belt is not easy. I am looking forward to that and I don’t look forward to engaging in local fights anymore.”

Quaye pounced on his opponent from the opening round and landed powerful shots that troubled Amos (16-6-1, 9 KOs) early.

The Tanzanian kept his distance in the second round to avoid trading punches with Quaye but the Ghanaian took the fight to him by attacking his body.

In the third round, Quaye dropped Amos with a crippling body shot. Amos barely beat the count. Moments later, it was all over.

The win earned Quaye his first ever international title. He is now expected to be in the top 15 of the next WBO lightweight rankings.

“I am getting closer to achieving my dream of becoming a world champion with this win. I am very happy and I look forward to getting into the WBO ratings as soon as possible,” said Quaye.

In other bouts, Felix Ajom stopped Billy Quaye in round one of their super featherweight six rounds contest.

Jacob Laryea forced veteran Ben Ankrah to retire in the second round in a scheduled six-round welterweight contest.