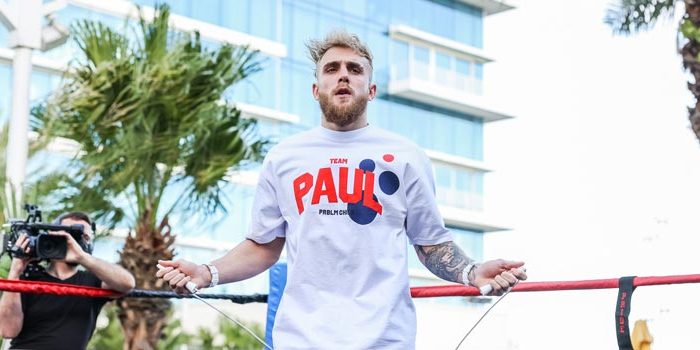 International superstar and unbeaten pro boxer Jake “The Problem Child” Paul and former MMA world champion Tyron “The Chosen One” Woodley showed off their skills at a media workout Wednesday as they near their highly-anticipated rematch headlining a SHOWTIME PPV this Saturday, December 18 from AMALIE Arena in Tampa, Florida.

Rounding out the lineup were a pair of fighters competing on Saturday’s non-televised undercard. Entering the ring were veteran contender and Jake Paul’s co-trainer J’Leon Love, who returns to the ring to face Marcus Oliveira in an eight-round bout, and professional boxer and MMA fighter Chris Avila, who will square off against Anthony Taylor in an eight-round attraction.

Wednesday’s event took place at the Pool at Seminole Hard Rock Hotel & Casino Tampa, prompting Paul to take advantage of the location, transitioning from the ring to the pool to swim some laps to close out his public media workout.

Here is what the fighters had to say Wednesday:

“That was my last cardio workout of camp so we took advantage of the pool being right there. Had to get some laps in.

“I don’t think a fight between me and Tommy Fury will ever happen. He had his shot. I’d like to see him fight twenty more times to get the same payday he was going to get against me.

“I don’t expect this to be a more difficult fight. That’s because my skills have improved so much since the last fight. I’ve sparred 200 rounds since then and I’m able to improve so much because I’m still early in my career.

“The amount I’m able to improve between fights is still massive and I really went into this training camp with a chip on my shoulder because I wasn’t happy with my performance in the first fight.

“I learned in the first fight that I just have to stay focused and stick to the game plan. It’s boxing and you’re going to get tagged. Now that I’ve been through it, I have a lot more confidence going into this fight. Tyron was the first person who ever landed a punch against me and it was a great learning experience.

“If I would have went in there and just knocked him out, I wouldn’t be as good as I am right now. I wouldn’t have had the same hunger to improve in training camp.

“I’m always planting seeds for the future, because I’m so confident in my ability. There’s only one outcome for Saturday, and that’s me winning. I’m going to keep calling out big names.

“Woodley’s power was about a four out of 10. The shot he caught me with was a lucky shot while I was falling backward. My balance was just off so it barely hurt. I’ve been hit by people harder in sparring.

“There’s two ways that this fight goes. One, he could come out guns blazing and just trying to knock me out. Or he plays it slow and tries to survive all eight rounds. Either way, he’s going to lose.”

“Jake was able to get some free shots off in the first fight that I shouldn’t have let him get. The defense is going to be tighter and the activity will be higher in this fight.

“Jake didn’t do anything that surprised me in the first fight. He was trying to play everyone else like he wasn’t a serious fighter. Other guys didn’t take him seriously and they got knocked out. I trained like I was fighting Mike Tyson.

“We already did this once. I know the opponent well already. They just needed a yes from me and they got it very quickly.

“There wasn’t a ton of volume for me from a boxing standpoint, but it was more than I had been doing in MMA. We’ve been trying to keep it in my mind to throw more. Not just any kind of volume, but the specific kind of shots I should have thrown.

“Rounds one through three, he didn’t hurt me, but he looked a lot busier than me. I’m the only one that landed damaging shots. I was pressing him and backing him up and it’s going to be the same thing this time.

“I think I surprised him in the first fight. They told him that I was going to gas out but I was the one who controlled the second half of the fight. They all lied to him about what I can still do.

“When I knock him out and beat him again, they’re going to forget about him. He gives people something to talk about and he’s doing it on purpose.”

“I have knockout power throughout all the weight classes, but I do feel stronger at this weight. The girls at this weight are a little slower, so it’s going to be a different attack than what you saw from my last fight.

“I’m super excited to sign with Jake’s promotional companies. It was an easy decision. What he’s done in a short amount of time is amazing. He’s not just bringing entertainment, but he trains like the real fighters do. He’s got a championship mindset and I’m proud to be a part of that.

“For me and my team, we’re always making sure that I’m staying humble. I have a task in front of me and that’s Miriam Gutierrez. I always train like I’m the underdog. Once you overlook your opponent, you won’t get what you want in the future.

“A fight with Katie Taylor would be the biggest in women’s boxing history. We’re both top of the pound-for-pound lists, so that’s extremely exciting. We’re both tremendous fighters and we want to prove who’s the best on fight night.

“I’m expecting a war on Saturday. Gutierrez is a tough and durable fighter. She’s a natural lightweight too. This is a good measuring stick for me and Katie Taylor, because that’s the only person to beat Gutierrez. I know what I’m capable of doing at 135 pounds.

“For this fight I’ve been able to eat and stay on weight. I like the discipline that it takes for me making 126-pounds, but lightweight is where the big fights are.”

“I’ve had great sparring partners to get me ready for Frank. I’m actually used to sparring guys more my size in the past before this camp. So I had to make that adjustment but I’m used to it by now.

“There’s always nerves when you’re going into a fight, but this was a pretty quick yes to accept this fight. We’ve trained for more than four rounds, but I know that four rounds in a real fight is different than sparring.

“I’m a fan of a lot of guys in combat sports. I’ve seen behind the scenes what it takes for them to compete. I just have so much respect for what fighters do and the grind that they have to go through on the way up.

“This is one of those bucket list things that I’ve always wanted to do. I’ve always been a fan of all the different combat sports and had this fantasy about fighting. It became a reality and it was a chance I had to jump at.

“I definitely want to represent for my brotherhood with the NBA guys. There’s a lot of guys who are probably going to be wagering on me and that definitely comes into play.”

“I have been doing this for a while. I show my guys on the field what I’m about, and I’m going to show Deron Williams on Saturday.

“I have been cardio training to get myself ready for NFL seasons. This past year, I wasn’t really sure about whether I was going to play football or not. My coach told me that I should take a shot at boxing, and I did.

“Ochocinco (former NFL wide receiver Chad Johnson) fighting on the Mayweather vs. Paul undercard inspired me. We got in the gym around the same time. If you go to his Twitter page, you will see he and I in the same gym in 2006. I wasn’t really surprised when I saw him box. I told a lot of my friends that he was going to be good, and I knew how hard he took it. I just wish he would have had more time to prepare. He would have been way better. I still think he won the fight.

“I stopped playing football at 208 pounds as I got up in age. As you get older, you want to get lighter to help your bones and body. Right now, I am probably about 211, but I’m right there at my fighting weight.

“Right now, if a team in the playoffs has a great chance to make a run and go to the Super Bowl, that is the only way I will go back. I just feel like I did everything. The only thing I didn’t do was win a Super Bowl. I had two ACL and two shoulder injuries, and to be able to play 16 years, gain 16,000 yards, and make five Pro Bowls, I was blessed. The only thing I wasn’t blessed to get is a Super Bowl ring.

“I have gone through this fight so many times. I take my hat off to Deron and to any guy who would get in the ring. Even though I’ve been around the sport enough, I am still learning the boxing game. For both of us to get in the ring, I salute him.”

“This is what dreams are made of. I’m super excited to run the Australian flag high. Everyone saw what George Kamobsos did in the U.S., and I’m looking to follow him up and make everyone proud.

“This has been an exciting journey. I’m here in Tampa to take care of business Saturday night and then move toward the world title.