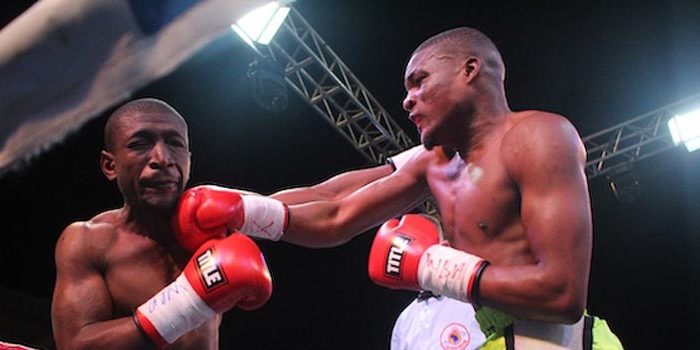 There’s no need to fear, The Beast is here, said Nestor Tobias after his prospect Matheus Heita captured the WBA Pan Africa super bantamweight title in front of his home crowd at Walvis Bay’s Kuisebmond Stadium on Saturday.

The 23-year-old improved to 7-0 after pummeling Zimbabwean journeyman Tinashe Mwadziwana (31-14) into submission, with the visiting fighter throwing in the towel at the start of the sixth round to conclude the MTC Sunshine Productions’ Together As One V main event.

Heita had Mwadziwana hanging on from the first round already, landing several power blows to the body which had his rival retreating. He staggered the experienced Zimbabwean twice in the second round, first with a left hook to the temple and then an overhead right which landed flush in the face.

More of the same ensued in the third, as Heita attacked his opponent at will with a flurry of blows to the head and body.

By the fourth, it looked like Mwadziwana would fall as a relentless Heita continued his assault resulting in heavy swelling around his rival’s eyes.

In the fifth, Heita repeatedly attacked the body with crunching hooks before going upstairs in search of the knockout punch. Bruised and battered, Mwadziwana did not come out for the sixth round.

“I knew I was going to take him out. I was not worried. I did not care about his experience. I’m a guy who throws lots punches and if I catch you, you can go,” Heita said.

Never mind the calibre of fighter in front of him, Heita is the real deal, Tobias said. So good that he could get a world title shot before reaching double figures in appearances.

“When it comes to youngsters like Heita, you can see the future of professional boxing [in Namibia] is in good hands,” Tobias said.

“The guy has got everything, skill, power and determination. Of course, he’s still learning but he’s just going to get better. After two fights, then we can talk about something bigger.

“We brought him here to challenge for the WBA Pan Africa title in front of his fans and he put up a great show. He demonstrated his boxing skills and the power that he’s got,” Tobias continued. “I told him when he wins this title fight, the sky is the limit. For now, we go to the drawing board to plan on how to get him into the top 15 in any of the top four boxing organisations, so he can be able to challenge for the world title. Maybe he can get a world championship fight before he makes it to 10 fights.”

Meanwhile, Martin ‘Alegator’ Mukungu became the first national boxing champion to hail from Rundu when he captured the featherweight title with a 10th round KO of Immanuel Jason.

Nestor Thomas won his bantamweight fight via a third round KO of Antoni Moses, as Fredrick Nghutenyane earned a points decision over Johannes Morsande.